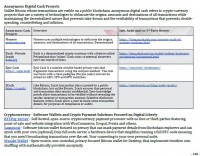 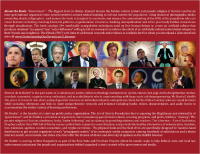 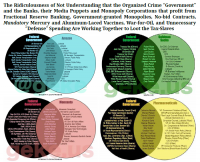 Why are we asking for funding?

The Art of Liberty Foundation, a start-up public policy organization exposing inter-generational organized crime’s control of the “Government”, media and academia from a principled voluntaryist perspective, is releasing the 5th edition of their seminal publication with new content and an updated sub-title: “Government” – The Biggest Scam in History… Exposed! – How Inter-generational organized crime runs the “Government”, the media, and academia.

The book reveals that “Government” is illegitimate, illogical, unnecessary and a technique of inter-generational organized crime to rob and control societies.  The book debuted in 2018 as a draft for crowd-sourced review and fact-check has now become a global hit with 4850+ copies sold to 20+ countries while the free PDF preview edition has been read on-line or downloaded over 20,000 times. The fifth edition can be pre-ordered in a crowd funding campaign on IndieGoGo that runs through 12/12/21 at http://www.Government-Scam.com/IndieGoGo.

Interview on the book where we talk about crypto and Epic Cash: https://www.thehighersidechats.com/etienne-de-la-boetie2-the-government-scam-inter-generational-organized-crime-the-freedom-plan/